“There were few better arguments at that time that carried the weight of that damned clock!”

You know who said that? Former finance minister and prime minister Paul Martin. He didn’t slay the deficit in the 1990s for fun. He did it because thousand of Canadians like you made him do it and used the National Debt Clock to make it happen.

You’ve done it before, and you can do it again.

We’re already planning a post-COVID Canada-wide campaign to bring the National Debt Clock to every single province. We’ll do dozens of media interviews. And we’ll do campaign stops so you can show your neighbours the National Debt Clock in person. Let’s be honest, most people aren’t like you. They don’t pay attention until you put something right in front of their face.

But we have a problem: Prime Minister Justin Trudeau broke the National Debt Clock.

Concerned Canadians like you put the National Debt Clock on the road in the 1990s. They designed a huge scoreboard mounted on a big trailer. They never dreamed they’d need more than 12 digits. But they had never seen borrowing like this.

That’s a one with twelve zeros behind it. That’s a thousand billion. That’s 13 digits. And that’s more than the old National Debt Clock can handle.

Once this pandemic ends, you need the right tool to fight a debt this big: you need an even bigger National Debt Clock.

The best way to build a National Debt Clock today is to put a huge video screen on the side of a full-sized moving truck. We can put up those huge flashing numbers to show the debt spinning up in real time. We could even tailor the message to show the video of Trudeau saying the budget would balance itself. 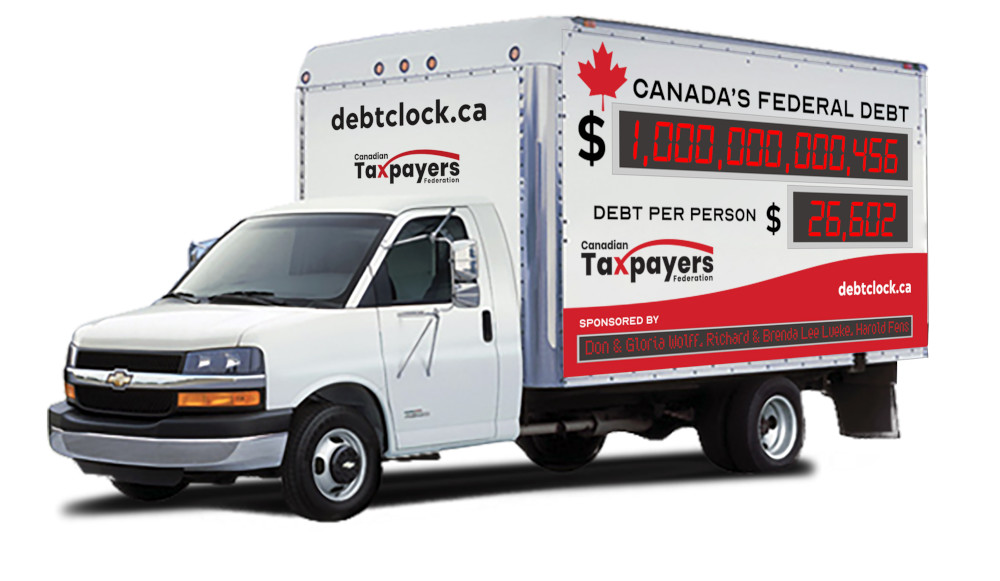 So far, here's what has been raised:

You know the National Debt Clock can make a difference because it’s done it before. It pushed Martin to slay the deficit in the 1990s. We know you and thousands of other Canadian Taxpayers Federation supporters can do it again.

We would like to thank our most generous donors by recognizing them on the National Debt Clock. If you donate at least $300, you can have your name displayed right on the clock. We will contact you to ask if you want your name displayed or not and how exactly you want it to appear.

A monthly gift will go even further to hold politicians accountable and fight for lower taxes and government waste.