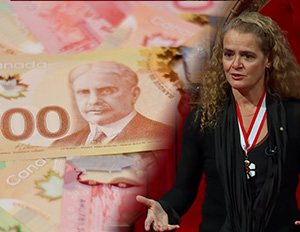 OTTAWA, ON: The Canadian Taxpayers Federation today delivered a petition signed by more than 200,000 Canadians calling on the Trudeau government to put an end to a decades-old policy that allows former governors general to bill taxpayers for their expenses.

“When your leave your job, you shouldn’t get to keep your expense account – especially when it leaves taxpayers on the hook for up to $206,000 per year, for life,” said CTF Federal Director Aaron Wudrick. “Canadians are outraged that this policy is in place and they want it changed. The prime minister has dragged his feet on this issue for years. It’s time for action.”

Recent public opinion surveys confirm that Canadians overwhelmingly oppose the overly generous compensation for retired governors general, with 87 per cent saying current compensation and benefits are too generous, and 72 per cent saying post-retirement expense accounts should be entirely cut off.

A copy of the petition can be found at: https://www.taxpayer.com/petitions/cut-off-expenses-when-a-governor-general-leaves-office