Pay hikes during pandemic an insult for Ottawa taxpayers 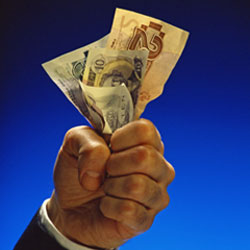 TORONTO, ON: The Canadian Taxpayers Federation is calling on the City of Ottawa to freeze salaries in light of information showing pay costs for city employees going through the roof.

“While thousands of Ottawans lost their jobs or took pay cuts because of the pandemic, the City of Ottawa was busy giving its employees $87 million worth of salary increases,” said Jay Goldberg, the CTF’s Interim Ontario Director. “Over 92 per cent of municipal employees saw their salaries increase last year. Those pay hikes were paid for by hardworking Ottawa taxpayers, many of whom saw their small businesses close, lost their jobs, or had their hours reduced.”

To help pay for the City of Ottawa’s runaway bureaucrat salaries, Ottawa City Council is planning to raise property taxes by three per cent for the year 2022.

Council has already raised property taxes by three per cent for this current fiscal year.

“Hardworking Ottawa taxpayers are being squeezed even further to pay for these extravagant pay hikes,” said Goldberg. “Council should cancel its planned property tax increase and ask government employees to share in the burden of the downturn instead.”