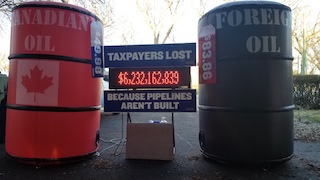 This op-ed was published in the Halifax Chronicle Herald on June 1, 2019.

A lack of pipeline capacity in our country is costing Nova Scotians and all Canadians billions of dollars worth of valuable services.

The Canadian Taxpayers Federation calculated how much extra revenue the federal government would collect if a lack of pipelines didn’t reduce the Canadian price of oil compared to the U.S. price, based on data released by the Office of the Parliamentary Budget Officer.

Canadian taxpayers lost $6.2 billion between 2013 and 2018 and can expect to lose another $3.6 million every day until the end of 2023 if governments continue to get in the way of pipelines.

That lost revenue could be used to fund services and programs in the province, while also providing the opportunity to reduce taxes. This year, 34 per cent of Nova Scotia’s operating budget is projected to come from the federal government, so the money that Ottawa is throwing down the drain by roadblocking pipeline projects matters to the province.

To put the billions into perspective, the major redevelopment of the QEII hospital in Halifax will cost about $2 billion. The Cape Breton Regional Hospital in Sydney is expanding its cancer centre, emergency department and critical care units for $100 million.

The lost government revenue since 2013 could have built at least three major hospitals or expanded and upgraded more than 60 existing hospitals across Canada. That’s a significant amount of health care spending without increasing taxes.

And if governments continue to block pipelines, the total lost revenue by 2023 could have fully funded nearly 25,000 new teachers for 10 years. It could have paid off an incredible 80 per cent of Nova Scotia’s projected debt. Or every single Nova Scotian could be exempted from paying federal taxes for nearly two years.

In Nova Scotia, residents pay some of the highest taxes in Canada and yet face doctor shortages and clogged emergency rooms causing issues for ambulance access. For Nova Scotia, throwing away pipeline revenue is a terrible waste.

Ottawa is leaving tons of cash on the table by either getting in the way of pipelines such as Energy East, or not acting when governments such as Quebec’s threw major roadblocks in the way.

Nova Scotia Premier Stephen McNeil has recognized the value of pipeline projects, even suggesting Energy East should have been expanded into Nova Scotia.

“The safest way to move this product is through a pipeline,” McNeil said last year. “I get the fact that there needs to be consultation, there are challenges associated with communities, but how do we work to move that forward on the benefit of the nation?”

Even if Energy East followed the proposed route to New Brunswick, Nova Scotians would have had the opportunity to create jobs to service the pipeline construction and operation. The lost revenue cited above doesn’t include revenue that the provincial government could have seen from any spin-off job creation in Nova Scotia.

In a province with a need for both reduced taxes and improved services in areas such as health care, the revenue that Ottawa is losing for Nova Scotians and all Canadians by roadblocking pipeline progress isn’t just chump change. It’s millions per day and more than a billion per year.

It’s time for Ottawa to get on board or get out of the way.

Paige MacPherson is Atlantic Director and Franco Terrazzano is Alberta Director of the Canadian Taxpayers Federation. The CTF is on a cross-country tour that stopped in Halifax on May 30, showing in real-time how much money Canadians are losing because Canadian oil isn’t sold at its full value due to a lack of pipeline capacity.