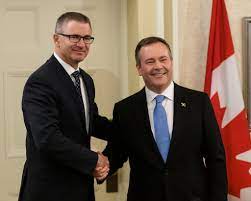 “It’s good to see the deficit declining, but spending is still going up,” said Kevin Lacey, Alberta Director with the CTF. “Alberta taxpayers also deserve a plan to balance the budget. Without a plan, the government is flying blind.”

The deficit is expected to be $5.8 billion this year.

Alberta’s spending per capita is the highest in Canada and has consistently been higher than the average of the 10 provinces over the last 25 years, according to the Blue Ribbon Panel on Alberta’s finances. This is the most startling number: Alberta’s annual expenditures would be $10 .4 billion less if its per capita spending simply matched the average of spending in Canada’s three largest provinces.

“We can’t wait for COVID to go away to get a plan to balance the budget, there is always going to be uncertainty about the pandemic, it’s all the more reason why a plan is needed,” said Lacey. “The government was elected to tackle the province’s spending problem, and it’s time Alberta’s politicians tighten their belts like everyone else.”