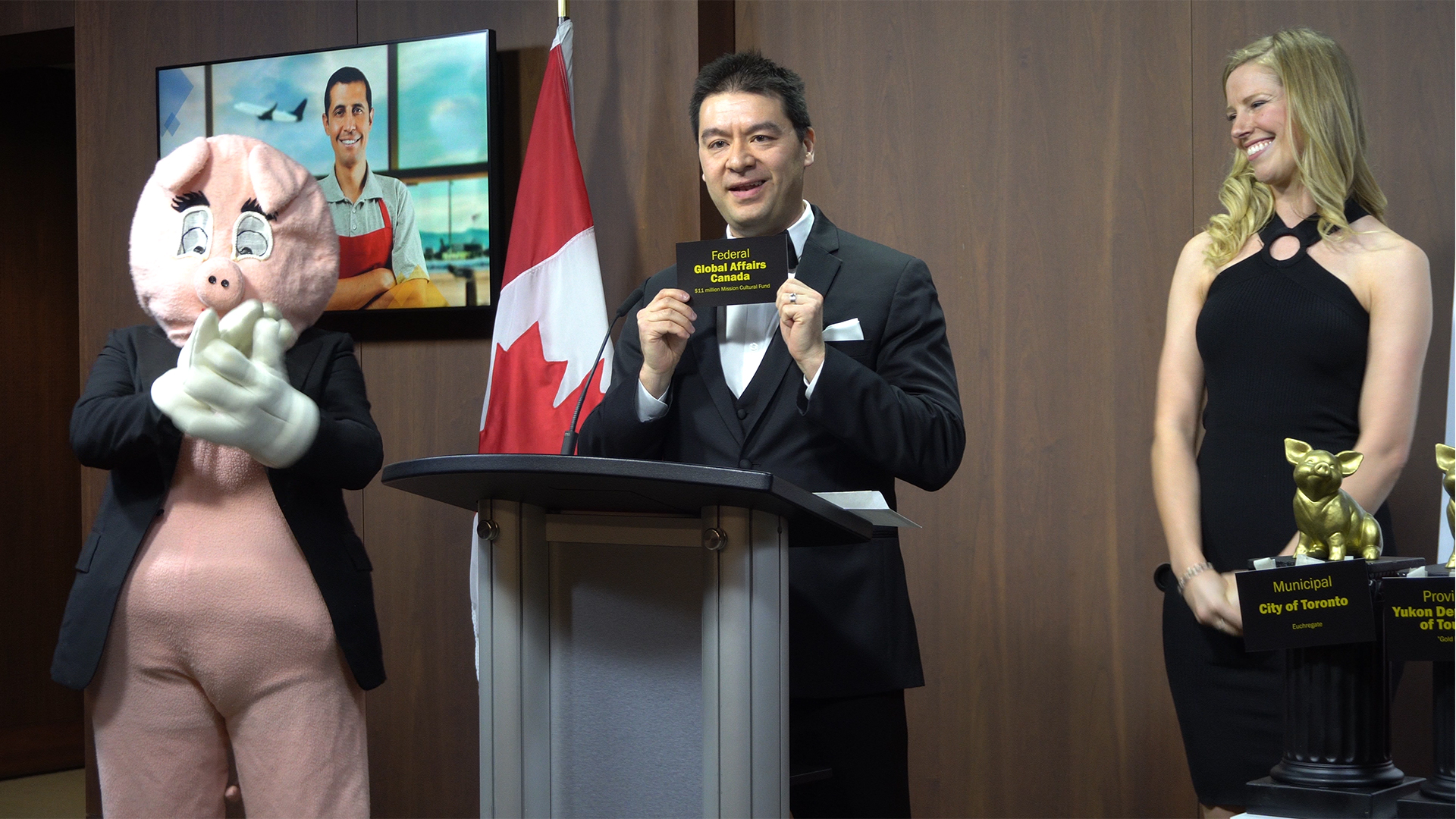 The Teddy, a pig-shaped award given annually by the CTF to government’s worst waste offenders, is named for Ted Weatherill, a former federal appointee who was fired in 1999 for submitting a panoply of dubious expense claims, including a $700 lunch for two.

“Global Affairs Canada managed to spend $11 million out of a $4.5 million program budget to fly chefs around the world to cook fancy meals so it is a worthy federal winner this year,” said Wudrick. “And the Yukon Tourism Department spending $139,000 on a campaign to get social media influencers to pan for gold in a river was a truly epic way to waste taxpayer dollars.”

Global Affairs Canada spent $11.2 million (out of a budget of $4.5 million) over three years from its Mission Cultural Fund, which included a program to fly chefs around the world to cook at various Canadian diplomatic missions. In addition to the chef flown to New Delhi in 2018 to cook Indian food at a cost of $17,000, other examples include $15,000 to fly a chef to the Dominican Republic to cook at a 2017 Canada Day event, and $4,500 to fly a chef to the Miami consulate to cook “signature Canadian dishes.”

The Yukon Department of Tourism spent $139,000 as part of a campaign to promote and stage a tourism campaign involving putting gold in a creek and flying in social media influencers to look for it.

The “Gold Rush II” initiative was originally intended to be funded by private money, but a crowdfunding effort to raise $100,000 only ended up raising $4,500, which was used to buy 3.5 ounces of gold to put in a creek. The Yukon government then stepped in with taxpayer money to cover the rest of the plan to pay for three social media influencers and one reporter to document the sparsely-attended event.

The City of Toronto spent considerable resources investigating an illegal gambling operation at some of its community centers: seniors paying $1.25 to play three hours of euchre.

The CTF obtained 186 pages of documents detailing the bureaucracy’s extensive work cracking down on the old-timers’ sinister racket, which was eventually dropped once the story went public, with Toronto Mayor John Tory joking about calling off the “fun police.”

Applebaum served nearly two decades as a Montreal city councillor and briefly served as acting mayor beginning in 2012, before being arrested and charged in June 2013 with 14 charges including corruption and bribery, and was ultimately convicted on eight charges.

After serving a year in prison, Applebaum was paroled. In 2019, the City of Montreal went to court to try to force Applebaum to repay his $260,000 taxpayer-funded severance package, to no avail (the city is planning an appeal). Applebaum is remains eligible for a provincially-managed pension and stands to collect more than $1 million in pension payments by age 90.

Federal – Independent Ontario Senator Donna Dasko for spending $15,000 to survey Canadians for their thoughts on the Senate, only to find out the top response was that the Senate was ineffective and pointless.

Federal – Parks Canada for spending $65,000 erecting a wooden fence on Signal Hill in St. John’s, which spawned such intense public backlash the department took it down less than 48 hours later.

Provincial – The Government of New Brunswick for spending $130,000 to fly graffiti artists from Toronto to the province to be inspired before returning to Toronto to spray paint New Brunswick-themed murals in that city and post them on Instagram.

Provincial – Quebec’s Ministry of the Environment for spending $4.7 million to switch to a paperless inspection process, only to find out it didn’t work properly and reverting to paper forms.

Municipal – The City of Victoria for spending $5,150 on a stainless steel ping pong table in a public park.

Municipal – The City of Vancouver for spending $200,000 to paint large red rectangles on the road at five bus stops to try and deter people from parking.

Click HERE for our backgrounder on all 2020 Teddy Award nominees and winners.