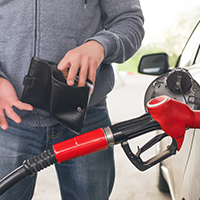 OTTAWA, ON: The Canadian Taxpayers Federation is shining a light on the high cost of the federal carbon tax before rebates are provided to Ontario families tomorrow.

“Families are still paying hundreds of dollars in carbon taxes every year even with the rebates,” said Franco Terrazzano, Federal Director of the CTF. “The Trudeau government claims families will be better off. But the Parliamentary Budget Officer’s numbers show the government is using magic math because the carbon tax will cost the average Ontario family $360 this year even with rebates.”

The Trudeau government claims that “families are going to be better off” with its carbon tax and rebate scheme. However, a PBO report shows this is incorrect.

Prime Minister Justin Trudeau says he will continue to raise his carbon tax to nearly 40 cents per litre of gas by 2030.

In addition to the carbon tax, the federal government charges a sales tax and fuel excise tax on gasoline. In total, federal gas taxes cost Ontario drivers 29 cents per litre, or about $22 when filling up a minivan. The federal government is also planning to impose a second carbon tax through fuel regulations in 2023. It will add up to 13 cents per litre to the price of gas by 2030, according to analysis by Environment Canada. There are no rebates for the second carbon tax.

“It’s extremely tone deaf for Trudeau to continue raising his carbon tax while drivers can barely afford to fuel up their cars now,” said Jay Goldberg, Ontario Director of the CTF. “Trudeau should follow Ontario Premier Doug Ford’s lead and provide relief by cutting the big tax bill at the pumps.”

You can find the annual and cumulative costs of the carbon tax and rebates for each provincial taxpayer here.