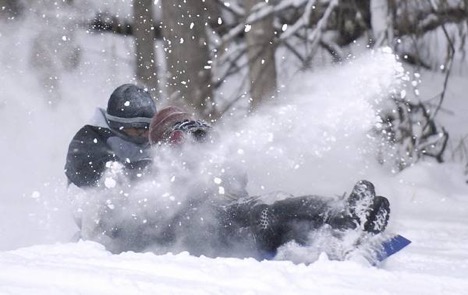 MONTRÉAL, QC : The Canadian Taxpayers Federation obtained a copy of a contract showing the borough of Rosemont – La Petite-Patrie spent $63,027 for snowmaking operations this winter.

Rosemont – La Petite-Patrie took out its snowmaking equipment on December 29th. Within 72 hours, Montreal would get a bit over 20 centimetres of snowfall.

“If there’s one thing we have in abundance in Quebec, it is snow,” said CTF Quebec Director Renaud Brossard. “If the borough had only waited a few more days, it would have had all the snow it needed at no cost to taxpayers.”

The contract given to Saint-Bruno-based Snö Innovation Inc. allows for a minimum payment of $57,027.61 for snowmaking in Joseph-Paré, Lafond, du Pélican and Père-Marquette parks, as well as $6,000 to cover fuel costs.

Montreal gets about two metres of snowfall every year.

“Spending $63,000 to make artificial snow in a city that has trouble respecting its snow removal budget just doesn’t make sense,” said Brossard. “That would be like paying for rain in Vancouver. Rosemont – La Petite-Patrie residents will remember it the next time their mayor hikes their taxes.”

The $63,000 spent on snowmaking equipment is equivalent to the entire property tax bill paid by 14 average households living in the borough.

Click on the following link to view the documents obtained by the CTF: http://www.taxpayer.com/media/Convention%20Sno%20Innovation_sign%c3%a9e%20d%c3%a9c2020.pdf