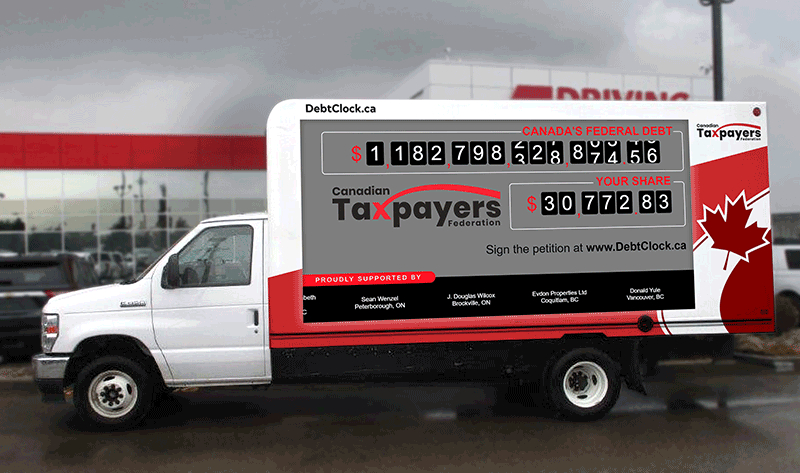 VICTORIA, B.C.: The Canadian Taxpayers Federation is launching its national Debt Clock tour to show Canadians from coast to coast what it’s like to watch Canada’s trillion-dollar debt go up in real time.

“It’s hard for most of us to imagine a trillion-dollar debt, but we know what it’s like to watch a bill going up in real time and that’s exactly what the Debt Clock shows Canadians,” said Franco Terrazzano, Federal Director of the CTF. “Canada’s national debt is already more than $1 trillion and it’s going up by almost $400 million every day.

“If a Canadian makes a two-minute YouTube video in front of the Debt Clock, that video will show the national debt go up by more than $500,000.”

The national Debt Clock is a huge digital counter mounted on the side of a moving truck that shows the national debt going up in real time. The CTF is taking the new Debt Clock across Canada to show the debt increasing in real time:

The CTF first launched the national Debt Clock tour in the 1990s to push back against large deficits and debt. The CTF built a new Debt Clock because the previous one did not have enough digits to display the current government’s $1,000,000,000,000-debt.

“It’s time for Prime Minister Justin Trudeau to rein in his massive borrowing and give taxpayers a plan to balance the budget,” said Kris Sims, British Columbia Director of the CTF. “A balanced budget means less debt for Canadian kids and grandkids to pay back, less money wasted on interest charges and fewer tax hikes.