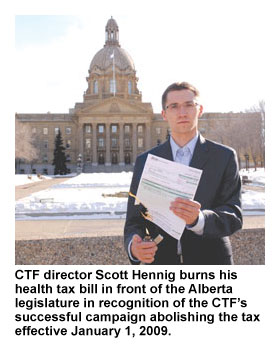 Most public policy victories involve other advocates. But not in this instance. In 2003 when the CTF initiated a campaign to abolish Alberta’s health tax it was ignored by mainstream media and dismissed by decision makers. But the case against the health tax was clear: it did not pay for health care, it had nothing to do with insurance, it was costly to administer, and it was regressive. The CTF published analysis, distributed commentaries, and used polling data to demonstrate public opposition. With each passing year, CTF directors marched in a mounting pile of petitions to lawmakers and made the case. First, it was opposition parties that came on side followed by the government eliminating the health tax … for seniors. Momentum had swung!

On the eve of calling a provincial election in 2008, Alberta Premier Ed Stelmach announced health care premiums would be scrapped for all Albertans. It meant each Alberta family would keep an additional $1,056 of their earnings. Every major media outlet in the province – Canadian Press, Calgary Herald, Edmonton Journal and the Globe and Mail – credited the CTF for the victory. As the Edmonton Sun put it: “the Canadian Taxpayers Federation campaigned tirelessly to get the premium scrapped.”