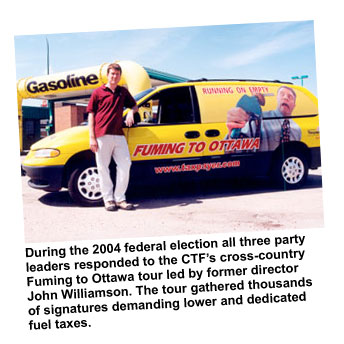 Each year the CTF holds Gas Tax Honesty Day which blows the whistle on government tax gouging at the pumps and demands gas taxes be reinvested into roads and infrastructure. Unbeknownst to most consumers, a third of the pump price of gasoline is tax!

When the event began in 1999, less than 42% of gas taxes collected by all levels of government was put back into “infrastructure,” and only 2% of what the feds collected was. Our message to governments on fuel taxes: “use it or lose it,” direct half into a Municipal Roadway Trust and return the remainder to motorists and taxpayers in the form of lower fuel taxes.

To date, over 150,000 Canadians (including 2,046 mayors and councilors from 459 communities) have signed the CTF’s gas tax petition demanding lower and dedicated fuel taxes.

During the 2004 federal election campaign, the CTF drove a decorated mini-van from Mile 0 of the TransCanada Highway in Victoria, B.C. all the way to Parliament Hill. The “Running on Empty, Fuming to Ottawa Tour” stopped in 40 communities, conducted countless media interviews, collected signatures and talked to thousands of taxpaying motorists. The campaign resulted in all three major party leaders finally making commitments to dedicate a portion of the federal fuel tax to municipal roads and infrastructure. Stephen Harper even declared as opposition leader at the time that he would lower fuel taxes if elected prime minister.