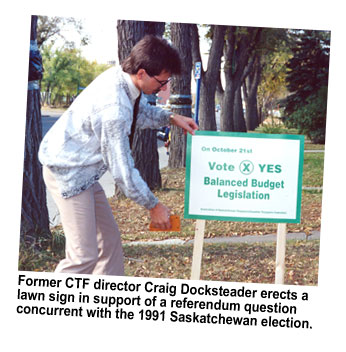 From Johannesburg South Africa in 2002, Prime Minister Jean Chretien announced that he expected Parliament to ratify the Kyoto Protocol Canada signed 5 years earlier along with 160 other nations committing to reductions in man-made carbon emissions.

Despite the protocol not being an issue in either the 1997 or 2000 federal elections − and without any consultation − ratification of the agreement would require carbon emissions be reduced 6% below 1990 levels by 2012. Sounds benign, but in practice, it required a 30% reduction in emissions given growth over the period.

Clearly, this would require a massive re-tooling of industry, reduction in energy consumption, purchase of international carbon (“hot air”) credits and significant “investment” in green energy infrastructure – all of it paid for by taxpayers and consumers. Meanwhile, the likes of the United States, China, India and Australia refused to play along.

The CTF immediately joined eight other organizations in running full-page ads in newspapers across Canada questioning the policy. We also targeted the ridings of Ontario cabinet ministers with radio ads.

But we really started gaining traction when we commissioned research showing Kyoto would cost the average Canadian family of four $2,700. In 2005, we updated the research to show the annual impact for a family of four was up to $3,000.

Fortunately, the Chretien government largely paid lip service to the protocol. Yes there were some industry quotas imposed, but for the most part, millions of tax dollars were spent on ads telling Canadians to drive less and wash their clothes in cold water.

In fact, after the Liberals left office in 2006 (nine years after signing the Protocol) targets were further away than ever – now requiring a 35% cut in emissions by 2012.

The CTF made it a priority for the new government to “Scrap the $10-billion Kyoto Implementation Plan.”

The ludicrousness of the targets coupled with a cooling toward global warming hysteria triggered a turn in public opinion.

On December 6, 2011, Canada signed an order in council withdrawing from the Protocol.